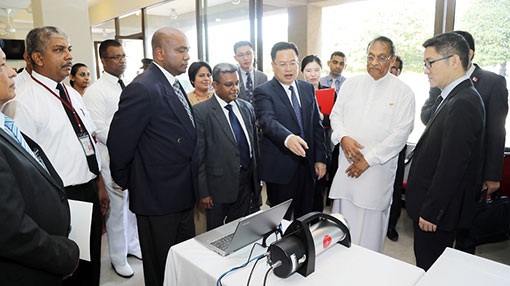 China on Wednesday donated a batch of security equipment to the Sri Lankan Parliament to ensure the safety of the public and legislators following the recent terror attacks in the island country.

The security equipment, which is worth 33 million Sri Lankan Rupees, including three state-of-the-art portable X-Ray machines and five walk-through metal detectors, were handed over to Speaker of Parliament Karu Jayasuriya by Chinese Ambassador to Sri Lanka Cheng Xueyuan.

Karu Jayasuriya, while thanking the Chinese government and its people, said the donation of the security equipment to the Sri Lankan Parliament was “very valuable” following the terror attacks.

“During the time of any natural or tragic calamity, China has been one of the first countries who has always stood ready to help Sri Lanka. We are grateful to the Chinese government and its people,” Jayasuriya said.

Ambassador Cheng said after the brutal terrorist attacks on April 21 in Sri Lanka, the Chinese government and its people have been standing together with the Sri Lankan side and firmly supported Sri Lanka to safeguard its national security and stability.

The Chinese Embassy in Sri Lanka also issued a statement on Wednesday, saying that the urgently needed security equipment provided by China will better secure the safety of the MPs from all political parties, as well as the Parliament staff, journalists and visitors.

“Currently, the Chinese government is studying implementing the requests raised by the Sri Lankan government case by case according to the priority,” the statement added.