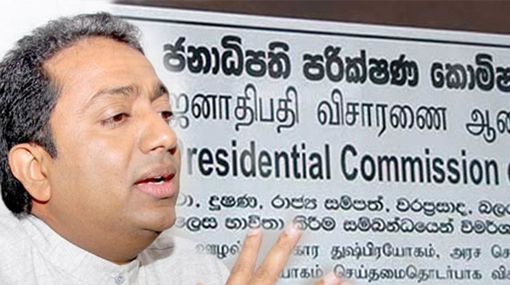 Minister of Education Akila Viraj Kariyawasam has been issued summons to appear before the Presidential Commission of Inquiry probe corruption and malpractices in the government, to testify over a complaint filed against him for allegedly misappropriating state funds during printing school textbooks.

A member of the commission stated the Education Minister is due to testify on the 8th of June.

In addition, Minister Kariyawasam has also been issued a notice to appear before the police unit of the Presidential Commission of Inquiry at 9.30 a.m. on the 1st of July.

It is reported that the former Commissioner General of Educational Publication I.M.K.B. Illangasinghe had yesterday (24) testified before the Presidential Commission of Inquiry regarding the said complaint.

Mr Illangasinghe has told the commission that the Education Minister contacted him personally to instruct him on publishing a statement followed by the minister’s signature and photograph in all school textbooks.

Minister Kariyawasam has said the relevant publication is aimed at gaining the popularity that he requires for a long successful political journey, Mr Illangasinghe further told the commission.

The Presidential Commission of Inquiry said it was revealed yesterday that additional Rs 4 was spent per textbook to print the Education Minister’s statement and photograph and that Rs 40 million was spent for printing school textbooks during the past few years.