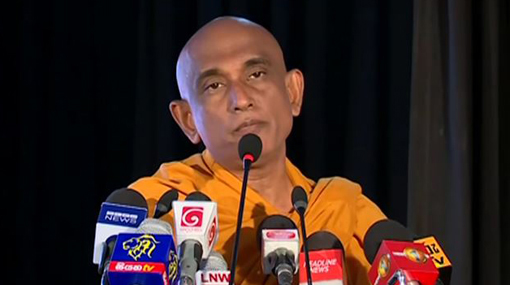 Rathana Thero urges President not to proceed with SOFA

Parliamentarian Venerable Athuraliye Rathana Thero urges President Maithripala Sirisena not to allow the government to proceed with the proposed Status of Forces Agreement (SOFA) with the United States.

Rathana Thero stated this last evening (24) addressing a public event held to speak up against the SOFA.

Stating that India and the United States are not rival countries now and that they have common interests, Rathana Thero stressed on the fact that Sri Lanka does not benefit by adapting a foreign policy which does not maintain friendly relations with India.

Rathana Thero says he does not believe that India wants Sri Lanka to become a base of the US armed forces.

Rathana Thero underlined that accommodating pro-China policies will ruin the friendly relations that Sri Lanka has established with India.

General Secretary of UPFA Mahinda Amaraweera also addressed the event urging the President to discontinue the Status of Forces Agreement with the United States.