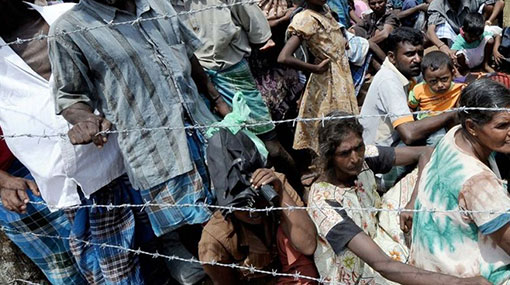 Stating that they had lived most pat of their life in India, the refugees said they did not have the economic wherewithal to set up their life and livelihood on returning to the island nation.

Over 3,200 refugees, who fled their war-torn nation in 1990s, live in seven refugee camps in the district.

On Monday, they came en masse to the Collectorate with a petition containing the single demand after Friday’s Madras High Court order permitting 65 Tamils from Sri Lanka to submit fresh application for citizenship to the Collector concerned.

Justice G.R. Swaminathan directed the Collectors to forward the applications without any delay to the Central government, which shall pass appropriate orders within a period of 16 weeks, considering the unique situation that the petitioners were placed in.

B. Selvam, 41, who came to India as a teenager, said his parents fled Sri Lanka, leaving behind all their property in 1990. “We know that we cannot take back our property there. We have no choice but to live in India as its citizens,” he said.

“We want Indian citizenship so that we have freedom to move around in search of our livelihood,” Mr. Selvam said.

“Despite access to good education, our graduate youth do not get any job opportunity in the government sector,” M. Subashini, 35, said.

An inmate of Sevalur camp, she rued that they had painting jobs only.

Pointing out that some were engineering graduates and a few others had completed teacher training, she said even when they got jobs outside the town, they needed to get permission to go out of the camp.

R. Manju, 26, an Indian citizen married to a Lankan refugee, said she and her second child did not receive doles meant for refugees.

The only solution to make their lives better would be to grant them citizenship, said the refugees.