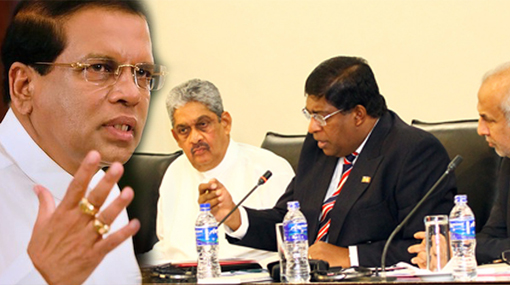 President Maithripala Sirisena, addressing the heads of media institutions today (26), has called the Special Parliamentary Select Committee is a ‘drama’ scripted by the Temple Trees.

Stating that he has not been called before the Parliamentary Select Committee, the President noted he would never testify before the committee even if he is summoned.

The 19th Amendment to the Constitution is the cause of current political instability in the country, the President has said addressing the heads of media institutions.

He has emphasized that the 19th Amendment has created two leaders in Sri Lanka.

Whoever wins the upcoming Presidential Election should take steps to abolish the 19th Amendment to the Constitution, the President has commented.

However, the President has remarked that abolishing the 19th Amendment before the next Presidential Election would be the best for the country.

The 19th Amendment to the Constitution is a curse to the nation and a need of the non-governmental organizations, the President has claimed.

President revealed that he has already signed the order to impose the death penalty for 4 prisoners who were convicted for drug dealing. These four death penalties will be carried out soon, the President added.

The President has highlighted that he is completely against the proposed Status of Forces Agreement (SOFA) with the United States of America.