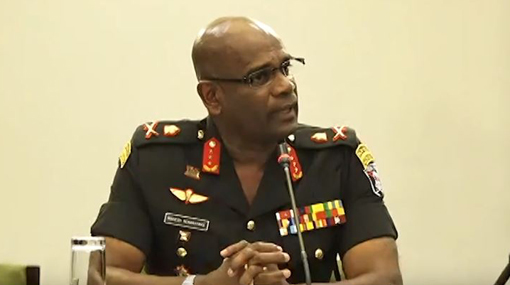 Impractical to say threat of terrorism is over - Army Chief

No one can assuredly say that the threat of terrorism in the country is completely over, says Commander of Sri Lanka Army (SLA) Lieutenant General Mahesh Senanayake.

Testifying before the Special Parliamentary Select Committee this afternoon (26), the Army Commander pointed out that giving such assurance is impractical.

“Just because several intelligence officers were arrested, the entire intelligence service was not dismantled,” the Army Commander commented further.

Responding to Minister Ravi Karunanayake’s queries on the current situation of the country, the Army Commander said the Tri-Forces and the Police, through the state intelligence service, are jointly taking measures to curb the growth of terrorism in the country.

Sri Lanka Army is renowned as an army that had defeated terrorism once but during the past 10 years there could have been certain setbacks, he said further.
MP Field Marshal Sarath Fonseka, criticizing the Defence Secretary’s testimony before the Select Committee that the ‘immediate threat’ of terrorism is 99 percent over, said several suspects with strong links to terrorist activities were arrested even after the assurance was given.

In response, the Army Commander said the Defence Secretary’s reference was to the arrests that were made subsequent to the terror attacks which prevented an immediate follow-up attack.

Responding to another committee member’s question whether he had been pressurized by any politician over the search missions and arrests carried out in the aftermath of the Easter attacks, the Army Commander said, he was contacted by MP Rishad Bathiudeen over an arrestee named Ishad Ahmed, however, he was not pressurized at any time.

The Army Commander told the committee, he had received information from the intelligence officers that Ishan Ahmed had ties to terrorist activities.

However, the Army Commander assured that neither MP Bathiudeen nor any politician or public officer had pressurized him over an arrest or the release of a suspect. “Not even the President and the Prime Minister has pressurized me.” He emphasized that the Army works independently.