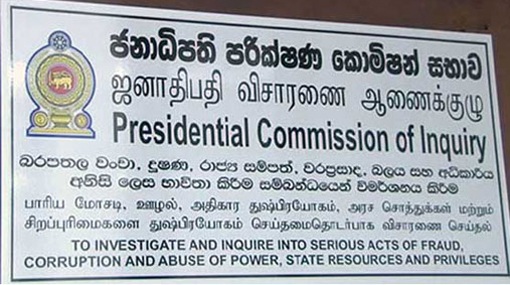 The Gazette notification pertaining to extending the official term of the Presidential Commission of Inquiry probing fraud and corruption at state institutions from 2015 to 2018 has been issued.

The term of the commission was expected to come to an end on July 18, however, following the 3-month extension it is expected to end on October 18.

The commission’s term was extended and announced by the Presidential Secretariat following a request made by its members, according to reports.

President Maithripala Sirisena appointed a Presidential Commission of Inquiry to investigate into allegations of corruption and malpractices that had taken place in state institutions from 15th January 2015 to 31st December 2018.

The functions of the commission included probing the acts of fraud, criminal breach of trust, criminal misappropriation of property, deception, abuse or misuse of power or authority, state resources, and privileges, and causing serious damages or losses for state assets and state revenue as a result of the aforementioned deeds.

The interim report of the commission was handed over to the President on June 06.