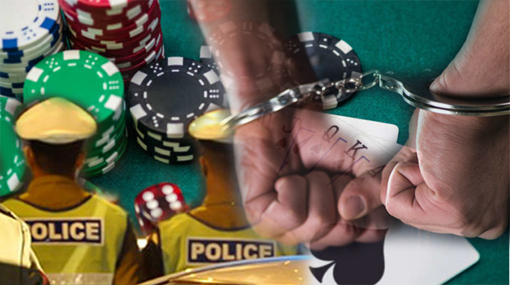 A suspect has been arrested last night (16) for assaulting two police officers during a raid to bust a gambling den at Thiththawelgodella, Bombuwala in Dodangoda area.

The suspect is a 39-year-old residing in the same area.

Three officers of Dodangoda Police had set off on a raid at around 12.30 p.m. yesterday (16) to bust an illicit liquor racket when they received information on a gambling den.

They arrived at the gambling den and managed to arrest a suspect at the site, however, a disagreement had arisen with several residents of the area as the police officers tried to seize a suspicious motorcycle parked on the roadside.

As the dispute escalated, the villagers have attacked the police officers with stones.

A Sub-Inspector and a Police Constable sustained injuries in a clash with the residents of the area and admitted to the Nagoda General Hospital in Kalutara.

The two suspects are to be produced before the Kalutara Magistrate’s Court today (17).

Dodangoda Police is conducting further investigations on the incident.