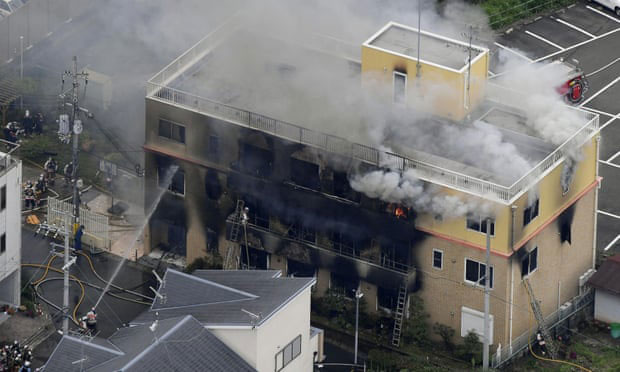 12 feared dead after suspected arson attack on studio in Japan

Twelve people are presumed dead, fire officials have said, and more could be missing after becoming trapped by a suspected arson attack at a renowned animation production company in Japan.

Thirty-five others have been injured, some of them critically, said Kyoto fire department official Satoshi Fujiwara.

Police in Kyoto said the fire broke out on Thursday morning at a three-storey building belonging to Kyoto Animation after a man burst in and spread an unidentified flammable liquid that set off the blaze.

The 41-year-old suspect was among the injured and has been taken to a hospital, Kyodo news agency reported.

Police earlier told public broadcaster NHK that several people had died in the fire but could not specify the number. The blaze was still burning nearly two hours after it started.

“There are many injuries at the scene,” a spokesman for the Kyoto city fire department told AFP.

He said the fire department had sent 35 fire engines and other firefighting vehicles to the site.

Police said the fire appeared to have been started deliberately. “A man threw a liquid and set fire to it,” a Kyoto prefectural police spokesman said.

Kyoto Animation is renowned for its high-quality anime productions such as Sound! Euphonium, A Silent Voice and Violet Evergarden.