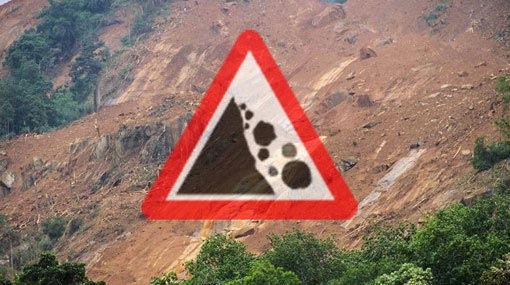 The alert has been issued as heavy rainfall experienced by the relevant areas within the past 24 hours has exceeded 100 mm.

If the rains continue, the public is urged to be on alert on the possibility of landslides, slope failures, rock falls, cut failures and ground subsidence, stated the Disaster Management Centre (DMC).

The NBRO requests the public to pay special attention to the Ratnapura-Wewalwatta Road, all mountainous areas, manmade cut slopes and roads within the relevant Divisional Secretariat divisions, and all the landslide susceptible areas previously identified by NBRO.

During this Landslide Early Warning period, the public should pay attention to the following:

-Development of cracks on the ground deepened cracks and ground subsidence
-Slanting of trees, electrical posts, fences, and telephone posts
-Cracks in the floors and walls of buildings which are built at slopes
-Sudden appearance of springs, emerging muddy water, blockage or disappearance of existing springs

If the above pre-landslide signs appear, the public should immediately evacuate from the area. Furthermore, residents living in landslide susceptible areas should be extra vigilant and should be ready to evacuate quickly to safe places if heavy rain continues.