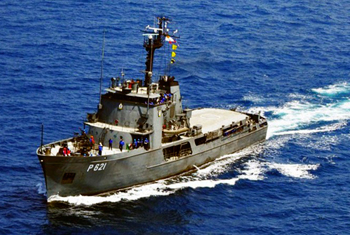 All nine sailors on the barge which met with an accident near the Galle harbour have been rescued by Sri Lanka Navy personnel while the barge has been abandoned, the Navy Spokesman said.

Navy teams managed to rescue 09 crew members onboard the vessel ‘Sri Lanka Glory’ which was in distress off Rumassala coast.

The vessel which was anchored off the port of Galle had been dragged away from the anchorage to Rumassala sea area.

On receipt of the distress call, the Navy promptly dispatched a naval craft and a relief team to the location.

Accordingly, the naval personnel managed to rescue the crew of the distressed vessel and escorted them to Galle harbour.