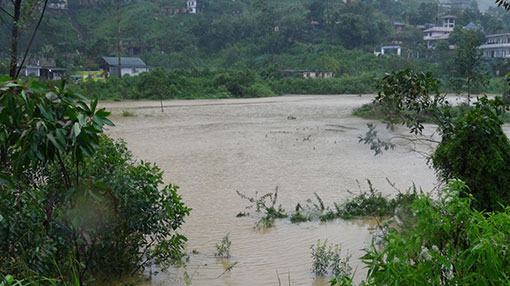 The Department of Meteorology says that the highest rainfall within the past 24 hours ending from 8.30am today was 251.5 mm and it was recorded in Dunkeld estate in Nuwara-Eliya district.

Surface wind were South-westerly to North-westerly and wind speed was (10-70) kmph.

The department further said that the prevailing windy conditions over the country and surrounding sea areas and showery condition in Central and Sabaragamuwa provinces are likely to continue.

Showers or thundershowers will occur at times in Sabaragamuwa, Central, Western, Southern and North-Western provinces, it said.

Showers or thundershowers may occur at several places elsewhere.

Showery and windy conditions are likely to continue in the North-western, Western, South-western and Southern sea areas of the island until the 21st July morning.

Showers or thundershowers will occur at times in the sea area off the coast extending from Puttalam to Hambanthota via Colombo and Galle.

Showers or thundershowers may occur at a several places in the other sea areas around the island in the evening or night.

Winds will be North-westerly to Westerly and speed will be 50 kmph in the sea areas around the island.

The sea area extending from Mannar to Pottuvil via Puttalam, Colombo, Galle and Hambantota will be very rough at times as the wind speed can increase up to (80-90) kmph at times.

Fishermen are advised not to venture into the above sea areas and naval communities are also requested to be vigilant until the 21st July morning.