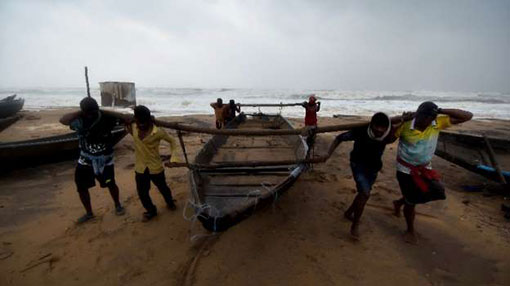 Fishermen warned not to go out to sea

The Department of Meteorology says that windy conditions are likely to continue in the North-western, Western, South-western and Southern sea areas of the island until tomorrow (21) morning.

The department today issued a warning for strong winds and rough seas for the sea areas from Mannar to Pottuvil via Puttalam, Colombo, Galle and Hambantota.

The sea area extending from Mannar to Pottuvil via Puttalam Colombo, Galle and Hambantota is expected to be very rough at times as the wind speed could increase up to 70 kmph at times.

Fishermen are advised not to venture into the above sea areas and naval communities are also requested to be vigilant, until tomorrow morning.

There is a possibility that near shore sea areas off the coast extending from Puttalam to Matara via Colombo and Galle, may experience surges due to the effect of swell waves, having 2.5-3.5 m height (This is not for land area).

The department also said that strong gusty winds up to (50-60) kmph at times are likely over the Western, Southern, Central, Sabaragamuwa, North-western and North-central provinces and in Trincomalee district in the country.