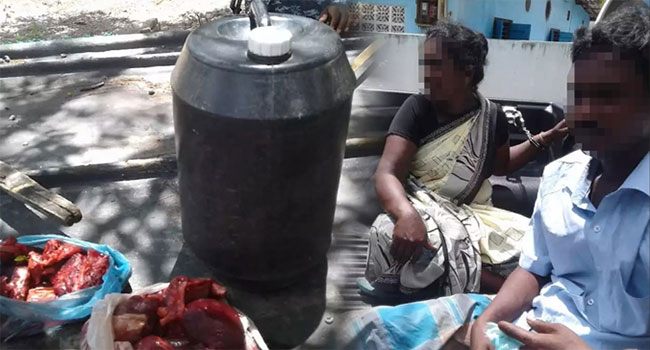 Man and woman arrested with illicit liquor and venison

Naval personnel have apprehended a man and a woman for the possession of several bottles of illicit liquor, during a search carried out in Putukkadu area in Jaffna.

A group of naval personnel attached to the Northern Naval Command, while conducting a search in Putukkadu area found 10 bottles of moonshine hidden in a house on Friday (19).

The Navy also nabbed the man and the woman residing at the house for possession of illegally brewed liquor as well as 3kg of venison.

The apprehended woman is 46 years of age while the man is 30 years old. Both suspects are residents of Putukkadu area.

The suspects along with illicit liquor and venison were handed over to the Excise Department – Kilinochchi for onward legal action, the navy said.