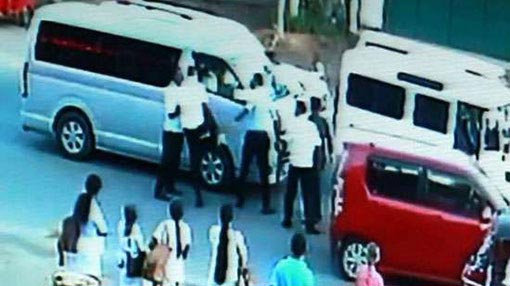 Four remanded over Kalagedihena attack to be produced in identity parade

The four suspects remanded in connection with attack on a van by a group of VIP bodyguards at Kalagedihena will be produced at an identification parade tomorrow (July 22).

The suspects, who were taken into custody after they surrendered to the Colombo Crimes Division (CCD), were remanded by the order of the Attanagalla Magistrate’s Court by the CCD yesterday (20).

The driver of the Defender involved in the incident and another person had surrendered to the CCD on the 19th July while another two suspects had surrendered on separate occasions within yesterday.

They were identified as Gamini Wijesuriya and Geeth Prasanna Bandara by the police.

An individual identified as Marcus Peter had surrendered this morning while another suspect, Sandun Pushpakumara also surrendered last afternoon. They were both reportedly passengers of the Defender when the incident had taken place.

Meanwhile, police found the Defender vehicle, involved in the attack, at a residence in Maharagama.

The Acting Inspector General of Police (IGP) Chandana Wickremaratne directed the CCD to investigate into the incident.