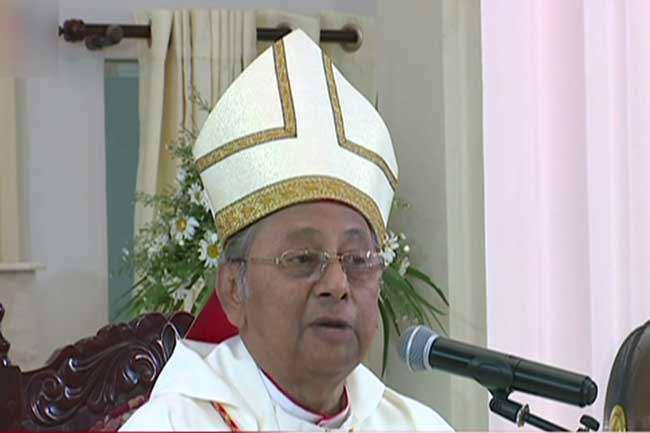 Our leaders have no backbone  Cardinal Malcolm Ranjith

Cardinal Malcolm Ranjith says that the Easter bombings were a series of attacks to destabilize the country for the interests of the international community.

The Archbishop of Sri Lanka stated this holding the service at the St. Sebastian Church in Katuwapitiya which was reopened today (21) after three months from the Easter Sunday terror attacks.

Addressing the event, the Cardinal stated that the Muslim community is not responsible for the attacks and that these attacks were carried out using misled youth to create chaos in the country for the interests of the international.

According to the Cardinal, the leaders of the country are acting in a manner that is desired by foreign powers.

He charged that the current government weakened the very strong intelligence unit of the country to satisfy the foreign organizations and various voluntary organizations.

He pointed out that the extremists who were arrested in Wanathawilluwa were released without any consequences and that the suspects who shot the person that tipped-off the police on the vandals who destroyed Buddha statues in Mawanella.

The Cardinal criticized saying that the National Security Council did not meet over the conflict between the Executive and the legislature since October and that the tip-offs received on the attacks were blatantly disregarded.

Cardinal Malcolm Ranjith further stated, the government which is responsible for all these should resign and hand over the country to the people who can govern it.