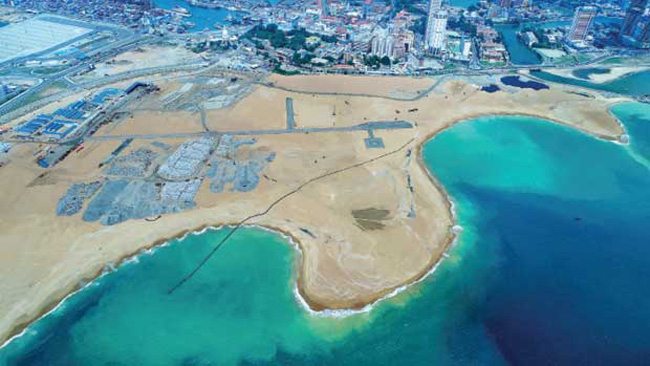 Sri Lanka has launched an updated map of the island incorporating the development projects, including the USD 1.4 billion Colombo port city being developed with massive loans from China, the state media reported on Sunday.

The “50,000” series of the Sri Lankan map, completed in 1995, has been updated and the new version was launched recently, Surveyor General P Sangakkara told Xinhua news agency in Colombo on Thursday.

The notable changes in the new map are the Colombo Port City, the Hambantota Port in the south, highways and the Moragahakanda Reservoir in the north-central province, he said.

Sri Lanka’s Survey Department launched the updated map of the island country due to the developments such as the China-invested Colombo Port City, the official said.

To launch the updated map, satellite images, as well as ground survey methods, were used, he said.

From this year, the Survey Department will update the map every two years.

Sangakkara said that despite the notable developments such as the Colombo Port City and the Hambantota Port, Sri Lanka still retains its shape.

“There have only been minor changes and this is not detectable in the large scale. Sri Lanka still retains the shape as the pearl of the Indian Ocean,” Sangakkara said.

The huge Chinese loans sparked concerns globally after Sri Lanka handed over the Hambantota port to China in 2017 as debt swap amounting to USD 1.2 billion for a 99 years’ lease.

The Colombo Port City is being built on reclaimed land along the city’s coastline on 269 hectares. Consequently, the expansion adds an additional land area.

Sri Lankan officials from the Survey Department have also held discussions with Google aiming to partner with them in the future to have a detailed map available on Google for the benefit of the local and international audience, the Xinhua report said.

Sangakkara said that the department was also hoping to launch a crowd sourcing project soon where the public themselves could update the map.