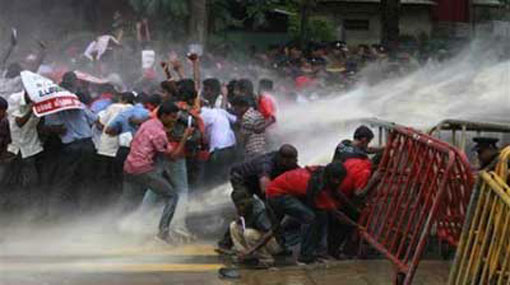 Riot police used tear gas and water cannons to disperse protesting university students at Lotus Road in Colombo, a short while ago.

Ada Derana reporter said that the protesting students had attempted to march through the police barriers placed at entry to the road, prompting police to fire water cannons and tear gas.

Police had earlier temporarily closed off the Lotus Road for traffic due to the protest march organized by the Inter University Students’ Federation (IUSF).

The students were reportedly marching towards the Presidential Secretariat.

Severe traffic congestion has been reported in the area and connected roads as a result of this, Ada Derana reporter said.