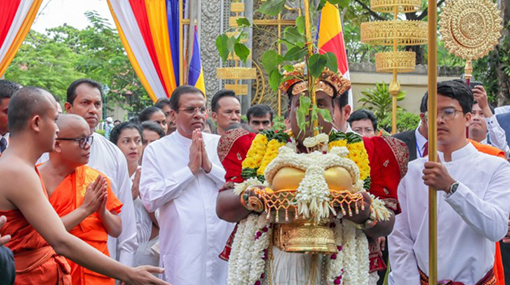 Sri Lanka and Cambodia should work together to spread teachings of Theravada Buddhism throughout the world, President Maithripala Sirisena has said.

In order to achieve this objective, measures will be taken to strengthen diplomatic relations between the two countries, he has added.

Accordingly, the establishment of a Sri Lankan Mission in Cambodia will be expedited and two consuls will be appointed for both the countries to coordinate the activities, President Sirisena has further said.

Buddhism is the historical foundation of the relations between Sri Lanka and Cambodia and the while strengthening economic and trade relations, our two countries should work in unison towards the noble mission of preserving the Theravada Buddhism, President has said.

The King, Prime Minister and the government of Cambodia have already pledged their support for this endeavour and the process will be taken forward with the assistance of Maha Sanga of the two countries.

Discussions on the expansion of investment and trade activities between Sri Lanka and Cambodia have successfully concluded, said the President adding that an invitation was extended to the Cambodian Prime Minister to visit Sri Lanka at the earliest opportunity.

Earlier, the Chief Incumbent of Lanka Preah Kosomaram, Most Venerable Samdech Preah Maha Ariyavamsa Dr. Sao Chanthol had requested the President of a sprout of Jaya Sri Maha Bo tree and sacred relics of the Buddha to be venerated by the Cambodian people.

Accordingly, on the advice of Most Venerable Omalpe Sobhitha Thero steps were taken to bring sacred relics reposed at Sri Bodhiraja Dharmayathanaya temple in Embilipitiya and a sprout of Jaya Sri Maha Bodhi to Cambodia in parallel to the visit of the President.