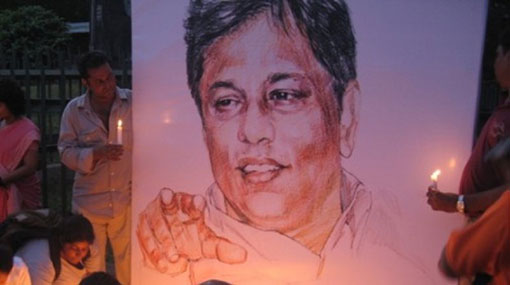 The daughter of a leading journalist killed during the rule of Sri Lanka’s former government accused the current prime minister on Tuesday of not doing enough to prosecute the former President’s brother for his alleged involvement in her father’s killing.

He is now the opposition’s presidential candidate.

Ahimsa Wickrematunge, daughter of Lasantha Wickrematunge, wrote to Prime Minister Ranil Wickremesinghe accusing him of using her father’s name to seek votes and not keeping his promise to achieve justice.

Lasantha Wickrematunge, editor of the Sunday Leader newspaper, was killed in 2009 while driving to work. His daughter filed a lawsuit in a Los Angeles court seeking damages from Gotabaya Rajapaksa, who was a top defense official in his brother’s government, for alleged involvement in the killing.

Gotabaya is a U.S citizen and he has started the process to renounce it because dual citizens can’t hold political office in Sri Lanka. He denied the allegations. “Who is Lasantha?” he asked a reporter during an interview while in office; while claiming the media was worried about one man when countless people were dying in violence.

The Sunday Leader was known for its investigative reporting some of which were about alleged corruption involving Gotabaya.

“From the day my father died, you have invoked his name to win votes. My father’s murder was a prop in the 2015 presidential and parliamentary election campaigns that made you prime minister,” the woman wrote.

“You brought President Sirisena to power and won control of Parliament for the UNP, all by promising justice for my father’s murder.”

Soon after the election in 2015 Ahimsa said she met Wickremesinghe who told her there were other priorities and justice was not just about Lasantha.

Even though responsibility for running the police was placed directly under Wickremesinghe’s chief of staff who was also the law and order minister, Wickremesinghe did not ensure proper investigation against Gotabaya, she said. While proving a corruption allegation against Gotabaya by the newspaper was a key to connecting Gotabaya in the killing, a police official botched the investigation in order to keep Gotabaya’s name out of the case, she charged.

“Where were you, prime minister, when the army and intelligence services refused to cooperate with the investigation? What did you do when you were told a critical informant against Gotabaya Rajapaksa needed protection? And when my father’s lead murder investigator, Inspector Nishantha Silva, was kicked out of the CID by the president, why did you not lift a finger in protest?”

There was no immediate reaction from the prime minister’s office.

Lasantha’s body was exhumed for a second autopsy after the new government was elected to power but the case has not made much headway.