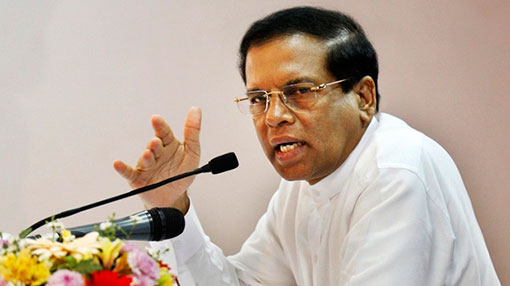 Everyone should come together to create a better country - President

While ensuring the prevailing freedom and the democracy in the country, everyone should come together to create a better country and a virtuous future generation, President Maithripala Sirisena said.

President made these comments addressing a gathering of youth followed by the opening of “SMART SRI LANKA” Vocational Training Institute in Katugatota today (15).

The institute was established with the objective of empowering the youth with skills and talents to face the challenges in the future, the President’s Media Division said.

Many steps have been taken during the last four years in order to build a justifiable society for the children of this country, said the President adding that he treats every child in an equal manner and do the utmost for their benefit.

Expressing his views on the harsh ragging system President said one should not forget that victims are also his or her brothers.

Being a non-political programme, SMART SRI LANKA is conducting various programmes add value to the youth.

The President also handed over the letters vesting the responsibilities of the ‘Smart Sri Lanka’ project in the Kandy district.

The new ward complex built under the guidance of the Department of Ayurveda, Central Province with the aim of providing more facilities for the people arriving at the hospital for treatments.

The President donated two lorries worth Rs. 17 million to the hospital to utilize for its community services.