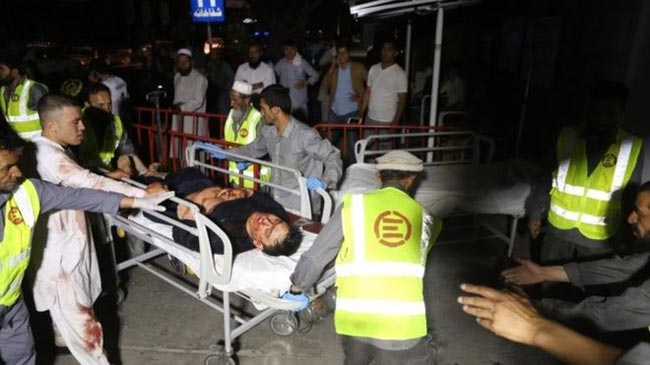 Bomb kills 63 at wedding in Kabul

A bomb has exploded in a wedding hall in the Afghan capital, Kabul, killing 63 people and wounding more than 180.

Witnesses told the BBC a suicide bomber detonated explosives during a wedding ceremony.

The explosion happened at around 22:40 local time (18.10 GMT) in an area in the west of the city mostly populated by Shia Muslims.

The Taliban denied it was behind the attack. No other group has admitted carrying out the bombing.

Sunni Muslim militants, including the Taliban and the Islamic State group, have repeatedly targeted Shia Hazara minorities in Afghanistan and Pakistan.

The Afghan interior ministry confirmed the death toll hours after the bombing. Pictures on social media showed bodies strewn across the wedding hall amid overturned chairs and tables.

Afghan weddings often include hundreds of guests who gather in large halls where the men are usually segregated from the women and children.

Wedding guest Mohammad Farhag said he had been in the women’s section when he heard a huge explosion in the men’s area.

“Everyone ran outside shouting and crying,” he told AFP news agency.

“For about 20 minutes the hall was full of smoke. Almost everyone in the men’s section is either dead or wounded. Now, two hours after the blast, they are still taking bodies out of the hall.”

A waiter at the hall, Sayed Agha Shah, said “everybody was running” after the blast.

“Several of our waiters were killed or wounded,” he added.

A Taliban spokesman said the group “strongly condemned” the attack.

“There is no justification for such deliberate and brutal killings and targeting of women and children,” Zabiullah Mujaheed said in a text message to the media.

The latest blast comes just 10 days after a huge bomb outside a Kabul police station killed at least 14 people and injured nearly 150.

The Taliban said it carried out that attack.

On Friday a brother of Taliban leader Hibatullah Akhundzada was killed by a bomb planted in a mosque near the Pakistani city of Quetta.

No group has so far claimed that attack.

A source in Afghan intelligence told the BBC that Hibatullah Akhundzada had been due to attend prayers at the mosque and was probably the intended target.

Tensions in the country have been high even though the Taliban and the US, which has thousands of troops stationed in Afghanistan, are reportedly getting closer to announcing a peace deal.

Taliban and US representatives have been holding peace talks in Qatar’s capital, Doha, and both sides have reported progress.

On Friday, US President Donald Trump tweeted that both sides were “looking to make a deal - if possible”.

The deal would include a phased US troop pullout in exchange for the Taliban guarantees that Afghanistan will not be used by extremist groups to attack US targets.

The Taliban would also begin negotiations with an Afghan delegation on a framework for peace including an eventual ceasefire. The militants have been refusing to negotiate with the Afghan government until a timetable for the US withdrawal is agreed upon.

The Taliban now control more territory than at any point since they were forced from power in 2001.