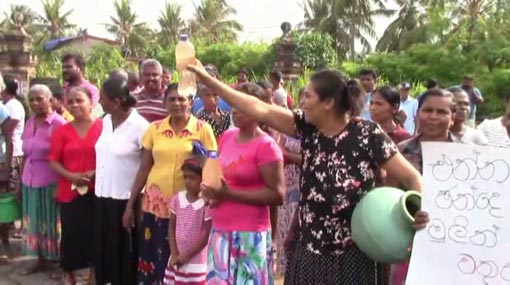 The residents of the Nelum Pokunagama area in Mahairuduwa have staged a protest due to a water problem obstructing the Colombo-Galle main road.

Ada Derana reporter stated that they had protested for about an hour and a half this morning (18), blocking the Galle-Colombo main road from the Mahainduruwa area.

It is reported that the vehicular traffic on the road has been disrupted as a result of the protest.

The residents of the Nelum Pokunagama village in Mahainduruwa pointed out that the authorities had not taken steps to resolve the drinking water issue they have been suffering from for a long time.

However, the protesters dispersed after Kosgoda Police intervened and promised to resolve the issue within 10 days, according to Ada Derana reporter.