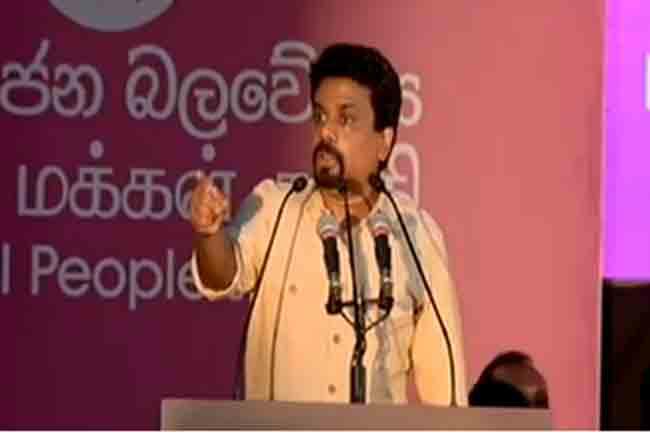 The newly announced presidential candidate of National People’s Power, Anura Kumara Dissanayake, says that he hopes to build an economy that moves forward through human resources where all communities can live together in the country.

He stated this addressing the rally held this afternoon (18) at the Galle Face Green to announce the Presidential Candidate of the National People’s Power, a political alliance led by the Janatha Vimukthi Peramuna (JVP) comprising of 28 other political organizations and civil organizations.

Addressing the gathering, he stated that they have good experience and understanding of the needs of everyone, from the small man to a high-class man.

“The National People’s Power is a political force that comprises of uncorrupted politics, good professionals and people who work committedly towards those goals.

We call for a new economic strategy for human resources that put national production first”, he said.

He further said,” Various divisions have been created in this country. There are divisions not only based on the language and culture, but also on sexual preferences.

We will ensure the clearance of all divisions within the communities in the country and promise to bring about a better social order by removing these divides.”

“Our people must become modern citizens. We must get ahead in the world. You must change for this country to move forward. For this, everyone should join together”, Dissanayake added.