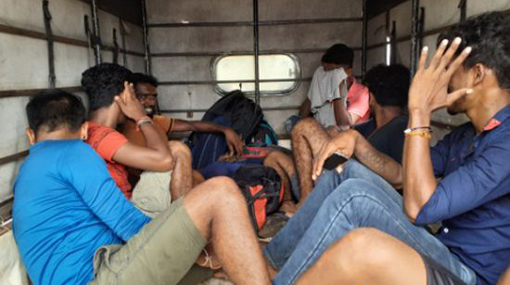 A group of Navy personnel has apprehended 12 Sri Lankans who were attempting to illegally reach Australia by sea route.

Western Naval Command in coordination with the Chilaw Police had conducted a joint search in between Chilaw and Thoduwawa regions and intercepted a suspicious small lorry on Saturday (17).

During further investigation, they have managed to apprehend these 12 individuals who were plotting to sail to Australia by illegal means.

The Navy stated that the 10 Tamils and 02 Sinhalese are among the arrestees.

They were identified as residents of Thoduwawa, Batticaloa and Welikanda areas.

The suspects were handed over to the Chilaw Police along with the lorry for further investigation.