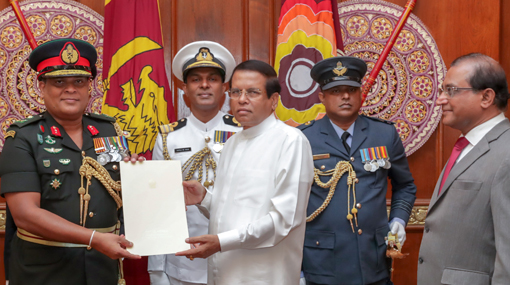 Major General Shavendra Silva has been appointed as the 23rd Commander of the Sri Lanka Army today (19) after promoting him to the rank of Lieutenant General.

Accordingly, he has received his letter of appointment from President Maithripala Sirisena at the Presidential Secretariat.

Joined the Sri Lanka Army as a Cadet Officer in 1984, Major General Silva held the position of Chief of Staff of Sri Lanka Army prior to this appointment.

He succeeds Lieutenant General Mahesh Senanayake who served as the Commander of the Army for more than 2 years.

Lieutenant General L H S C Silva, more popularly known as Lieutenant General Shavendra Silva was serving as the Chief of Staff of the Sri Lanka Army and Colonel of the Regiment for Gajaba Regiment and Commando Regiment at the time he was made the Commander of the Army.

Prior to taking office as the Chief of Staff, he served as the Adjutant General of the Army Headquarters and several other distinguished offices.

A proud product of the Sri Lanka Military Academy, he was enlisted to the Regular Intake 19 of the Army on 5 March 1984 soon after his bright school days, during which he captained the first 11 cricket team in the St Thomas’ College and the College’s Cadet Platoon, Cadetting Band before he became the Head Prefect of the College.

He has had an illustrious career from the rank of Second Lieutenant to Major General, covering all the salient appointments in his military career.

In command assignments, he was the youngest Commanding Officer ever produced by the Sri Lanka Army, in which he commanded an infantry battalion during the operation code named “Operation Riviresa”, conducted in 1995 to liberate Jaffna Peninsula from the clutches of the LTTE. At a very crucial stage of operations against terrorists, he was appointed as the Commander, Air Mobile Brigade by the then Commander of the Army. In August 2006, he was instrumental in re-capturing the Forward Defence Lines of Muhamalai, then known as the “National Front of Sri Lanka”, where half of the defences remained under the control of the LTTE at that time.

Thereafter, he commanded the victorious 58 Division along with the Commando Brigade which recorded the highest number of successful achievements during the “Wanni Humanitarian Operation” that liberated the country from terrorism. His Division made the longest journey during this operation and fought over 200 kilometers until its final victory and captured the single largest land mass ever captured by any formation, including the largest quantity of LTTE military hardware, weaponry and other equipment. His Division also conducted the largest ever hostage rescue mission at Puthumathalan by liberating over one hundred thousand civilians from the cruel clutches of the terrorists. In the aftermath of the war in 2009, he reached a landmark achievement in the history and was fortunate to be the youngest ever to be promoted to the rank of Major General in the Sri Lanka Army. Subsequently, he commanded the 53 Division, also known as country’s Reserve Strike Force (RSF).

In 2010, he was assigned as the Ambassador and Deputy Permanent Representative of Sri Lanka to the United Nations, in New York. He is the one and only serving military officer in Sri Lanka’s history to be promoted to an ‘Ambassadorial’ rank by the Foreign Service in Sri Lanka. Lieutenant General Shavendra Silva became the first Sri Lankan to be appointed to the United Nations High-Level Advisory Panel on Peacekeeping Missions by the then UN Secretary General.