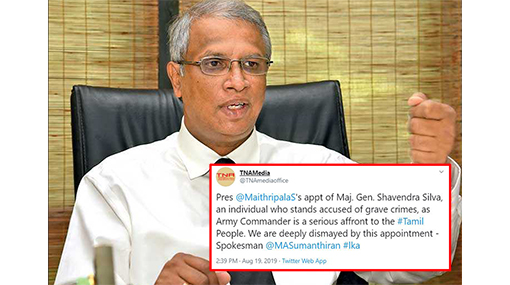 Posting a tweet on the official Twitter account of the Tamil National Alliance (TNA) today (19), the parliamentarian said the appointment is a “serious affront” to the Tamil people.

The TNA spokesperson also stated that the new Army Commander is “an individual who stands accused of grave crimes.

Speaking to Ada Derana, he said several international reports have levelled allegations against Major General Shavendra Silva and this appointment is a ‘kick in the face’ of Tamil people.

Meanwhile, the Centre for Policy Alternatives (CPA) also raised concerns over the appointment of Major General Shavendra Silva as the new Army Commander.

The CPA urged the government to take immediate steps to review this appointment “in light of the serious allegations levelled against Major General Silva”.

Pres @MaithripalaS's appt of Maj. Gen. Shavendra Silva, an individual who stands accused of grave crimes, as Army Commander is a serious affront to the #Tamil People. We are deeply dismayed by this appointment - Spokesman @MASumanthiran #lka