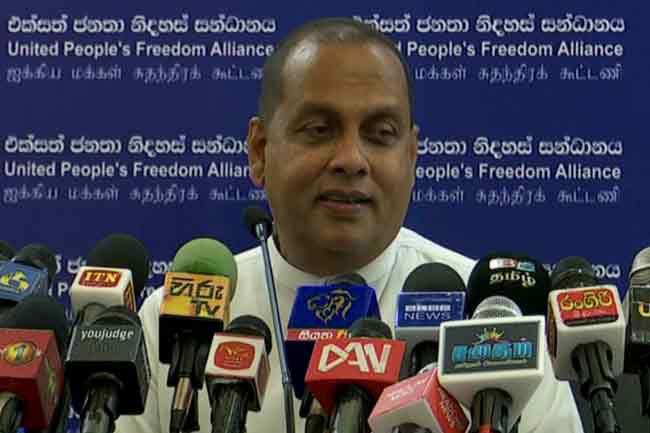 Gotabaya can gain SLFP support by joining the party - Amaraweera

He says that if the SLFP is to discuss with the Sri Lanka Podujana Peramuna (SLPP) and arrive at a Memorandum of Understanding (MoU), it would be with Presidential Candidate Gotabaya Rajapaksa.

He mentioned this at a press conference held in Colombo, today (22).

The UPFA General Secretary stated that the success of the discussion with the SLPP will be decided upon acting in a way that would ensure the identity of SLFP and the suggestions forwarded by the SLFP.

If the discussions fail, the SLFP might nominate their own candidate, he added.

However, there is no intention of nominating 2 candidates and that they are hoping to conclude the negotiation as positively as possible, he further said.

Further, General Secretary of the SLFP MP Dayasiri Jayasekara would also join the discussion with the SLPP in the future, he said.

Amaraweera stated that SLFP has not taken any decision to hold discussions with the United National Party (UNP) either.

Pointing out that Gotabaya Rajapaksa is not a member of the SLPP, Amaraweera stated that, an invitation to join the SLFP has been forwarded to him.

The best way Gotabaya Rajapaksa can obtain the support of the SLFP is by becoming a member of the party, he added.