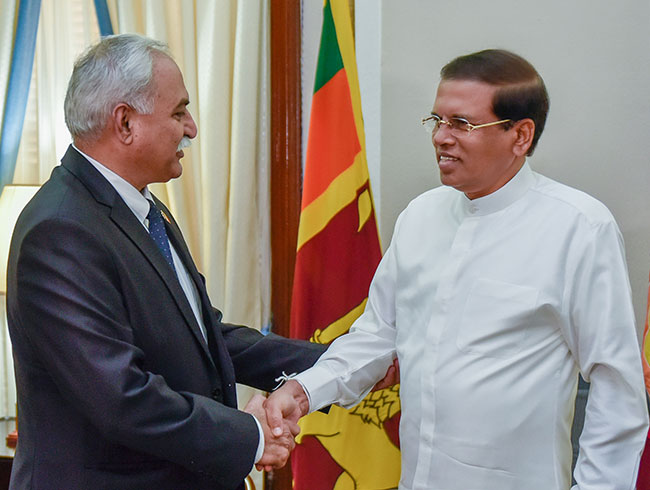 The President’s Media Division today issued a clarification with regard to a media release issued by the Pakistan High Commission in Colombo following the High Commissioner’s meeting with President Maithripala Sirisena on Tuesday (20).

The President’s Media Division stated that the said meeting took place at the request of the Pakistani High Commissioner of Pakistan and during which he briefed the President about the recent developments with regard to India’s abrogation of Section 370 and annulling of Article 35A of the Constitution of India.

“The President gave a patient hearing to the Pakistan High Commissioner’s views and stated that both India and Pakistan have excellent friendly relations with Sri Lanka and Sri Lanka’s interest is to see the growth of regional cooperation and friendship.”

“The President did not make any other comment on the issues pertaining to India and Pakistan,” the PMD said.

Issuing a statement, the Pakistani High Commission in Colombo said High Commissioner apprised the President about the current situation in the Indian Occupied Jammu & Kashmir.

The press release further reads: “During the meeting, the High Commissioner briefed the President about India’s illegal and unilateral actions seeking to alter the disputed status of Indian occupied Jammu and Kashmir and its demographic structure by revoking Article 370 and 35A.

“He also apprised the President of the deteriorating human rights and humanitarian situation in the Indian occupied Jammu and Kashmir, which has been under total lockdown and curfew since 5th August 2019. He added that these steps were in contravention of the United Nations Security Council (UNSC) resolutions on Jammu and Kashmir and the International Law.

“The President acknowledged that Jammu and Kashmir is a disputed territory and expressed his desire that this dispute should be resolved according to wishes of Kashmiris under UN Resolutions. He also offered Sri Lanka’s mediation and facilitation of dialogue between Pakistan and India to re-activate the SAARC forum.

“He further said that resolution of Kashmir issue is essential for permanent peace and stability in the region.”