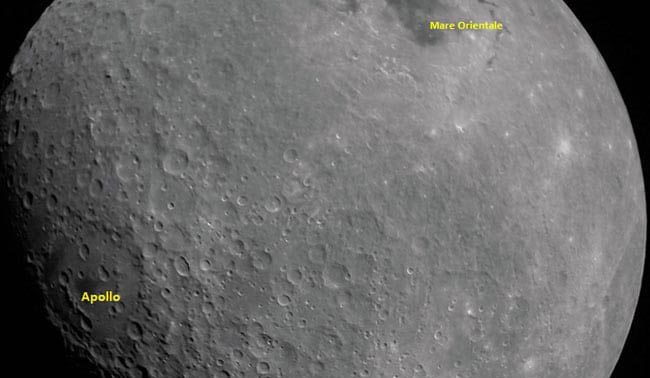 Day after it entered the lunar orbit, India’s second mission to the moon Chandrayaan-2 has captured the first images of the moon.

The images released by the Indian Space Research Organization (ISRO) were captured by the indigenously built Lander Vikram on Wednesday, while orbiting the moon at a height of about 2,650 kms from the lunar surface. Lander Vikram is part of the integrated mission module of Chandrayaan-2 carrying an orbiter, Lander Vikram and Rover Pragyaan. ISRO has also identified one of the most striking large-scale features on the moon- Mare Orientale basin, which is believed to be nearly 3 billion years old.

According to National Aeronautics and Space Administration (NASA), it was formed when an asteroid sized body collided with the moon. Initially, the astronomers thought these regions to be lunar seas and called them mare, which is Latin for sea.

Earth’s closest neighbour, Moon is nearly 3.84 lakh kms away from the planet. India’s first visit to the moon was in October 2008, when it gave the world evidence of the presence of water molecules on the lunar surface.

Chandrayaan-2 is India’s second mission to the moon and took off from Satish Dhawan Space Centre at Sriharikota on July 22. After revolving around the earth’s orbit for nearly 23 days, it began its journey to the moon on August 14.

On August 20, the premier agency announced that the spacecraft has successfully entered the lunar orbit. However, it is yet to reach the defined orbit of 100x100km. The mission module is now days away from its historic soft landing on the moon, scheduled for September 7.

A successful touchdown on the moon will bring India into the elite club of nations including US, Russia and China to have achieved the feat. However, the mission would be the first in the world to reach near the south pole of the moon, which had not been explored by any other country before.