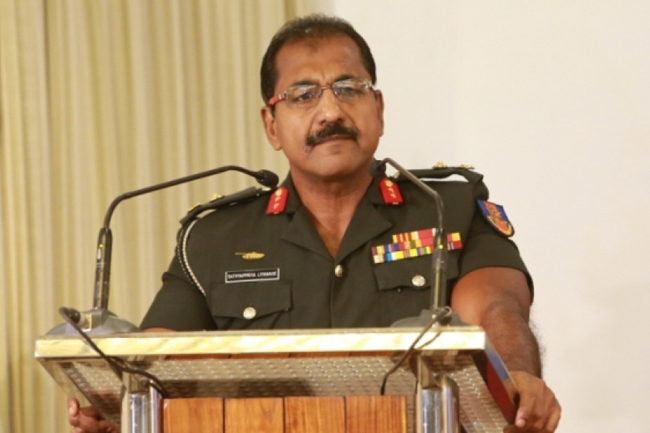 Major General Sathyapriya Liyanage has been appointed as the new Chief of Staff of Sri Lanka Army (SLA).

He is the 54th Chief of Staff of Sri Lanka Army, and takes over from Lieutenant General Shavendra Silva who was recently appointed as the new Commander of the Army.

Major General Liyanage of Sri Lanka Armoured Corps was serving as the Commandant of the Sri Lanka Army Volunteer Force (SLAVF) and Commander, Overall Operations Command before he was appointed as the Chief of Staff, the second highest office in the Army.

He is also the Colonel Commandant of the Sri Lanka Armoured Corps.

Major General Sathyapriya Dulanapema Thalarambe Liyanage is one among the few to be awarded one of the highest gallantry medals, Weera Wickrama Vibushanaya (WWV) which recognizes his selfless contribution to the war for peace.

Major General Liyanage is a proud product of Thurstan College, Colombo where he showed prowess in the field of sports, particularly in Cricket, Rugby Football, Athletics and Cadeting. In recognition of his contribution to the field of Rugby Football and Cricket, he was awarded College Colours for both games.

Upon successful completion of the secondary education, he joined the Regular Force of the Sri Lanka Army on 04 March 1984 as an Officer Cadet and completed basic military training at Sri Lanka Military Academy Diyatalawa before he was commissioned to the prestigious 1st Reconnaissance Regiment of the Sri Lanka Armoured Corps in the rank of Second Lieutenant on 16 November 1985.

In his illustrious career spanning over 35 years, he has held vital and important Command, Staff and Instructor appointments. Some of the significant Command appointments that he has held include Commanding Officer of 4th Armoured Regiment, Town Commandant of Trincomalee, Commander of 523 Infantry Brigade, Commander Armoured Brigade and Deputy General Officer Commanding in 55 Infantry Division.

In addition to his distinguished military career, as an academic, Major General Sathyapriya Liyanage has completed the Diploma in Diplomacy and Foreign Affairs at the Bandaranaike International Diplomatic Training Institute and Diploma in Defence Management in India.

He secured a First Class in his Masters’ degree program at the University of Madras in India for Philosophy. He also has participated in the Executive Seminar on ‘System Reform Challenges and Opportunities’ at the South Asia Centre for Strategic Studies in Washington DC and attended the Seminar on ‘Counter Terrorism and Violent Extremism in Maldives’.