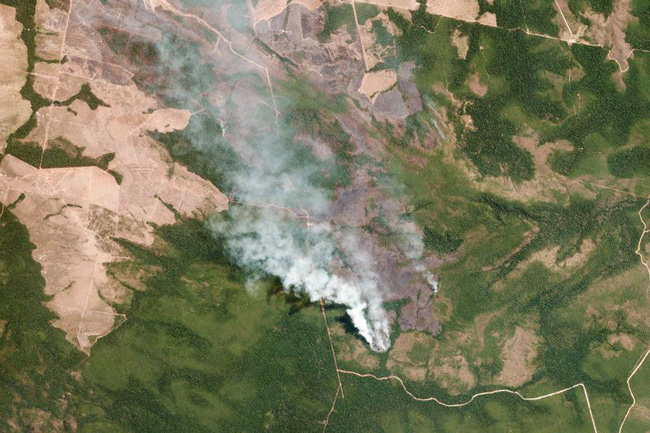 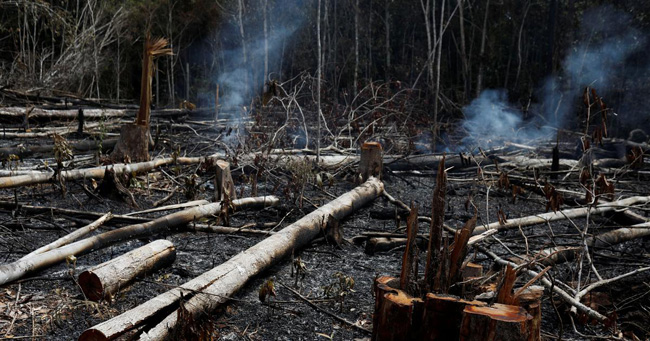 Brazil’s president has ordered the armed forces to help fight a record number of forest fires in the Amazon.

A decree issued by President Jair Bolsonaro authorises the deployment of soldiers in nature reserves, indigenous lands and border areas in the region.

The announcement comes after intense pressure from European leaders.

Bolsonaro has criticised the reaction of other nations, insisting wildfires “cannot be used as a pretext” for punitive sanctions.

It came after France and Ireland said they would not ratify a huge trade deal with South American nations unless Brazil does more to tackle blazes in the Amazon.

Many of the fires are thought to have been started deliberately, with suspicion falling on farmers who may benefit by having more available land.

Bolsonaro has declared support for the clearing of areas of the Amazon for agriculture or mining and he has faced heavy criticism from experts and campaigners who say his administration has given a green light to rainforest destruction.

In a televised address to the nation on Friday, Bolsonaro argued that forest fires “exist in the whole world” and “cannot serve as a pretext for possible international sanctions”.

Environmental groups held protests in cities across Brazil on Friday to demand action to combat the fires, and protesters also gathered outside the Brazilian embassies around the world.

The largest rainforest in the world, the Amazon is a vital carbon store that slows down the pace of global warming. It is known as the “lungs of the world” and is home to about three million species of plants and animals, and one million indigenous people.

Bolsonaro in his televised address confirmed that he had authorised the armed forces to help fight the fires. “I’ve learned as a military man to love the Amazon forest and I want to help protect it,” he said.

The decree itself was fairly vague in its wording, but specified that the military would be deployed to nature reserves, indigenous lands and border areas in the region.

The deployment of soldiers would be left down to regional governors who can request “preventive action ... against environmental crimes” and ask the army to “survey and combat fire outbreaks”, it said.

Defence Minister Fernando Azevedo e Silva is to oversee the order and will be responsible for allocating resources, it stated. The order initially authorises action for a month, from 24 August to 24 September.

Merkel called it an “acute emergency” and Macron tweeted: “Our house is burning.” Both said the issue must be discussed at this weekend’s G7 summit.

UN Secretary-General Antonio Guterres tweeted on Thursday: “In the midst of the global climate crisis, we cannot afford more damage to a major source of oxygen and biodiversity. The Amazon must be protected.”

President Donald Trump said that he spoke to President Bolsonaro on Friday evening. “I told him if the United States can help with the Amazon Rainforest fires, we stand ready to assist!” Trump tweeted.

Brazil’s president has hit back at criticism and accused leaders such as Macron of meddling for “political gain”.

Earlier this week, he even suggested that non-governmental organisations had started fires in the rainforest - despite admitting he had no evidence for this claim.

In his Friday television address, Bolsonaro criticised those spreading “baseless information” about Brazil’s commitment to preservation, insisting the country had “modern legislation” to protect most of its forest.

“We need to bear in mind that more than 20 million Brazilians live in that region,” he said. “We need to give opportunity for development. It’s not only about protection.” He also described the wildfires as within an “average” range for the last 15 years.

“We are in a traditionally hot and dry season, with high winds, when every year we have wildfires,” he said. “In hotter years, wildfires are more common.”

Satellite data published by the National Institute for Space Research (Inpe) has shown an increase of 85% this year in fires across Brazil, most of them in the Amazon region.

Bolsonaro has brushed off the latest data, arguing that it was the season of the “queimada”, when farmers burn land to clear it before planting. But Inpe has noted that the number of fires is not in line with those normally reported during the dry season.

Wildfires often occur in the dry season in Brazil but they are also deliberately started in efforts to illegally deforest land for cattle ranching.

Conservationists say Bolsonaro has encouraged loggers and farmers to clear the land. During his campaign, he pledged to limit fines for damaging the rainforest and to weaken the influence of the environmental agency.

US space agency Nasa, meanwhile, has said that overall fire activity across the Amazon basin this year has been close to the average compared to the past 15 years.