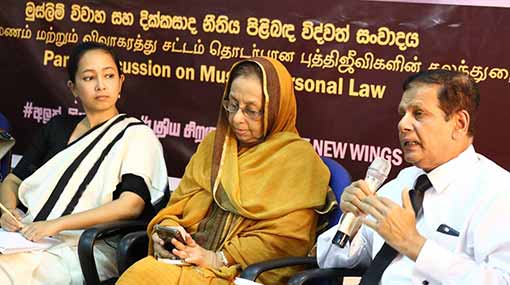 The age of marriage should be revised up to 18 years when the Muslim Marriage and Divorce Act is amended, says The New Wings organization.

This was discussed at length during a panel discussion organized by The New Wings in Colombo, on Muslim Personal Law held under the theme “Her Tears are Heavy”.

In the backdrop of Easter attacks, the discourses on Kadi courts handling the legal matters concerning Muslim marriages came to light.

This led to the discussions among Muslim ministers and parliamentarians on amending the Muslim Marriage and Divorce Act (MMDA) and a joint-proposal was tabled to the Cabinet of Ministers by the Minister of Justice & Prison Reforms and Minister of Muslim Religious and Cultural Affairs.

This proposal to amend the MMDA was recently approved by the Cabinet of Ministers.

Meanwhile, a panel discussion on Muslim marriage and divorce laws was held in Colombo yesterday (23).

A heated exchange of opinions was witnessed during the discussion as one of the participants spoke during the panel discussion.

Former Minister Ferial Ashraff, addressing the attendees, urged for all the necessary amendments to the MMDA as they have demanded.
The former minister stressed that the Muslim women cannot live in tears anymore.