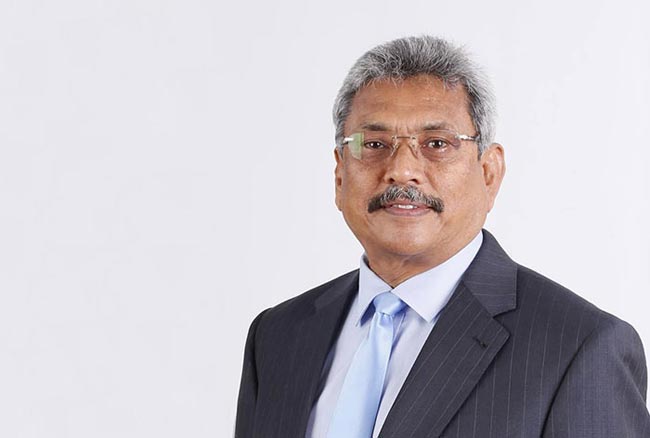 Sri Lanka Podujana Peramuna (SLPP) Presidential candidate Gotabaya Rajapaksa says he pledges to appoint an independent commission of inquiry to probe the Easter Sunday attacks through a government under his leadership.

The former Defense Secretary made this pledge in response to a request made by the Archbishop of Sri Lanka Rev. Cardinal Malcolm Ranjith for an independent commission of inquiry.

Rajapaksa stated that he fully understands the gravity of the situation and that he requests the current government to fulfill this long overdue request made by the Cardinal Ranjith.

The complete message of Gotabaya Rajapaksa:

“My attention is drawn to the statement made by the Archdiocese of Colombo and His Eminence Malcolm Cardinal Ranjith, Archbishop of Colombo on 21st April 2019, in the wake of the horrific terrorist attacks on Easter Sunday.

I can understand the deep sadness and pressure faced by His Eminence, due to the lack of response to the demands made by the relatives of the innocent people who died and were severely injured, in the ruthless terrorist attacks on Easter Sunday, which shocked the entire nation.

I firmly believe that His Eminence, The Cardinal is making this appeal not only on behalf of the Catholics who are suffering but on behalf of all the people of Sri Lanka.

The statement further urged, to take all preventive measures to ensure such a catastrophe will not befall Sri Lanka once again.

As a person who was instrumental in wiping out 30 years of brutal terrorism within a short span of 3 years, I fully understand the gravity of the situation and request the Government of Sri Lanka to respond to the long overdue and very fair request made by His Eminence, without further delay.

The people of the country are fully aware that, together with His Excellency President Mahinda Rajapaksa, we defeated terrorism and created a safe and secure nation, where people could live without any fear.

I hereby pledge that the request made by His Eminence, Malcolm Cardinal Ranjith to appoint an independent commission of inquiry will be promptly acted upon by a future government under our leadership and will ensure a country free of terrorism and extremism, so that people may live without fear again.”