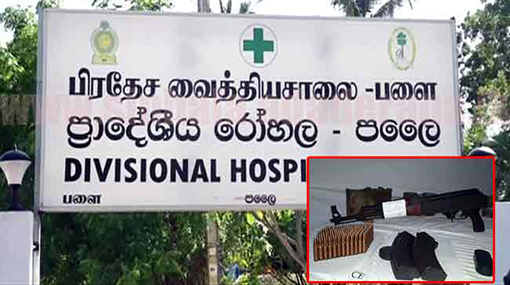 A search operation conducted by the Terrorist Investigation Division in the locality of Karandiya in Palai of Jaffna has led to the discovery of a concealed stash of explosives, firearms as well as various other weapons.

The operation was launched after information was obtained from the recently arrested Judicial Medical Officer (JMO) of the Palai Hospital, who is suspected of having terror links.

On the 18th of August, the JMO of Palai Hospital, Sinnayya Sivaruban, was arrested by the Army and handed over to the Terrorist Investigation Division (TID).

He was then detained by the Jaffna terrorist investigation unit for questioning.

Police media spokesperson said that during the interrogations, Sivaruban had revealed information on a concealed stash of weapons after which the search operation was launched.

The seize items included AK-47 firearm, two magazines, 11 hand grenades, 10kg of substance suspected to be explosives, 120 rounds of ammunition, a telephone and a multitude of other equipment.

Police media spokesperson said that a police team of the TID led by an ASP in the locality has been assigned to conduct further investigations on the incident.