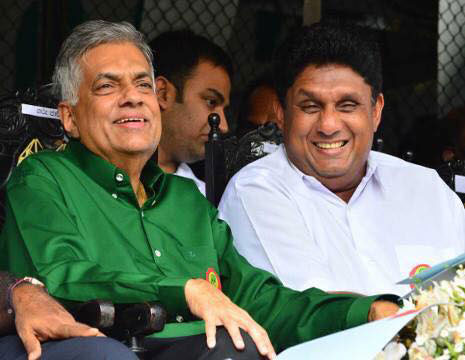 Sajith arrives at Temple Trees for crucial talks with PM

Minister Sajith Permadasa arrived at Temple Trees a short while ago for discussions with Prime Minister Ranil Wickremesinghe.

The Leader and Deputy Leader of the United National Party (UNP) were expected to meet for crucial talks today regarding the party’s candidate for the Presidential Election.

Sources revealed that a final decision on the matter is likely to be reached tonight possibly ending a long-dragged out internal crisis within the party which saw MPs divided and taking sides over the candidacy.

Minister of Housing, Construction and Cultural Affairs Sajith Premadasa, who is also the UNP’s deputy leader, has openly declared his intention to contest the Presidential Election.

However, the party is yet to formally announce its candidate while Prime Minister Ranil Wickremesinghe has reportedly told the senior members of the party that he intends to be the presidential candidate.

In a meeting recently held with the senior members of the UNP, it was decided that the party leader and the deputy leader must come to an agreement on who will be contesting in the upcoming presidential election.

Minister Lakshman Kiriella said this discussion would resolve the existing issue regarding the UNP’s presidential hopeful.

Minister Navin Dissanayake commented that according to the party’s constitution the deputy leader has to contest in the presidential election if the party leader does not take part.

This special meeting was scheduled to be held last Sunday (08), however, it was later postponed.