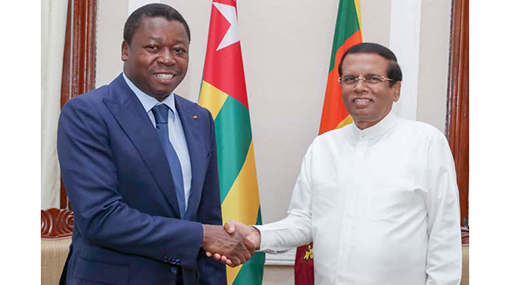 President of Togo Faure Essozimna Gnassingbé Eyadéma, who is in Sri Lanka for a two-day official visit, yesterday (11) called on President Maithripala Sirisena.

The two leaders have discussed at length on expanding trade and investment relations between the two countries.

The Togolese President stated that he would take part in a meeting with the leading entrepreneurs in Sri Lanka today (12) and invite them for new investment opportunities in Togo, especially for the garment sector.

The Togolese President commended his Sri Lanka counterpart for the successful measures taken to curb the terrorist activities within a short time period after the Easter Sunday attacks.

Mr Eyadéma stated that he expects to speak up about the progress Sri Lanka has achieved in its fight against terrorism when he addresses the international conference on global terrorism this Saturday.

President Sirisena, in response, has told his Togolese counterpart that Sri Lanka is keen on forming strong economic ties with African countries.

The Togolese President arrived at the Bandaranaike International Airport (BIA) at around 5.30 pm in a special aircraft accompanied by a delegation of 35 envoys.

The delegation will return to Togo tomorrow (13).