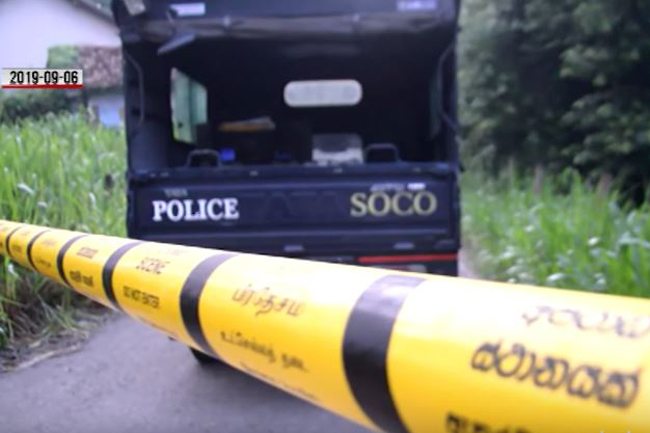 The six suspects in connection with the shooting of two policemen at Akuressa and the two T-56 assault rifles that were stolen from Panadura North police station have been remanded till the 25th of September.

The suspects including the two army soldiers attached to the Panadura army camp, who were taken into custody recently during the police investigations into the shooting at Akuressa, were produced before the Acting Magistrate of Matara under the Prevention of Terrorism Act (PTA) yesterday (12).

Three of the suspects, who are believed to have opened fire at the two cops, are to be produced for an identification parade.

On September 05, two police officers on duty in Akuressa had given chase to three persons on a motorcycle with no license plates and which had ignored their orders to stop. However, the suspects had opened fire at the police officers and fled.

Akuressa Police had continued investigations into the incident while based on information received by the Akuressa Police OIC, one of the suspects was taken into custody on September 09.

Based on the statement given by him, the other two suspects were also arrested by Akuressa Police. An army soldier attached to the Panadura army camp was also among the three arrested suspects.

Following the interrogation of the suspects, police had recovered two T-56 assault rifles, two magazines and ammunition hidden away by the suspects. It has been revealed that one of these two firearms had been used to open fire at the two police officers, police said.

During further interrogation of the suspects, it was also revealed that the recovered firearms are in fact the two T-56 assault rifles that had been stolen from the Panadura North Police Station recently.

Accordingly, a team of officers from Akuressa Police arrested an army soldier at Nalluruwa in Panadura North this morning in connection with the theft of the two firearms.

Meanwhile another suspect has been arrested for allegedly aiding and abetting this incident as well as for funding them, police said.