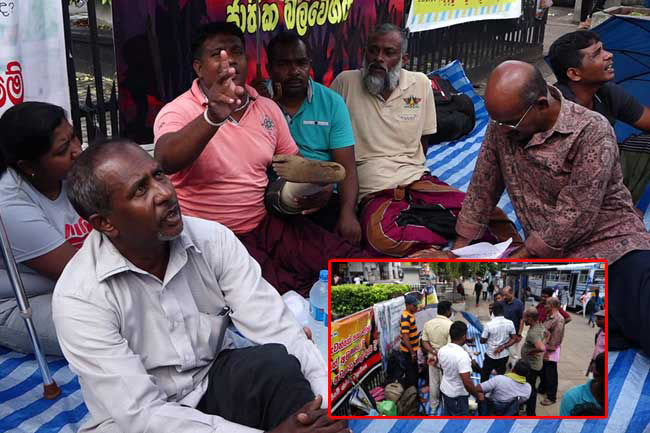 The protest staged by disabled war heroes and the families of the fallen, calling for solutions for salary issues and fulfilment of several other demands, was continued for the fifth consecutive day yesterday (13).

The protestors, on the 9th of September, marched up to the Presidential Secretariat from Shangri-La Hotel in Colombo and later staged their protest in front of the Colombo Fort railway station.

The war heroes demand the authorities provide their pension benefits even after they reach 55 years of age, as promised.

It was reported that the structure raised by the protestors was removed by the police on Thursday, however, the protest continued despite heavy rain.

The convener of the organization to protect war heroes rights, U.D. Wasantha said this protest is not a conflict between two groups of war heroes, as implied by SLFP General Secretary MP Dayasiri Jayasekara.

The organization to protect war heroes rights stressed that they would continue with their protest until proper solutions are provided for their demands.