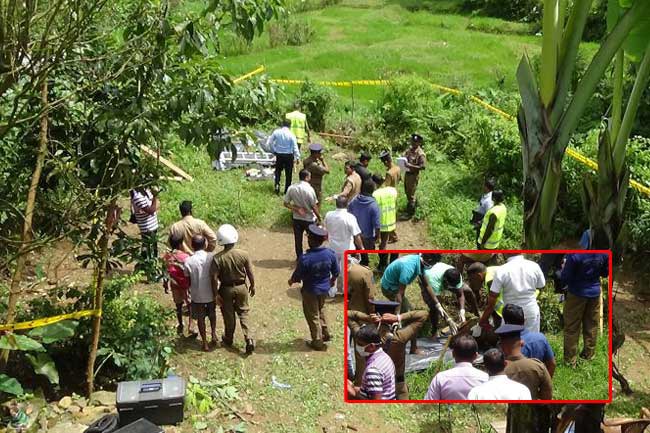 The son arrested over the murder of the 81-year-old woman named Walliamma Ragei has been remanded until the 23rd of September.

As per the order of the Acting Magistrate of the Hatton District Court, the grandson (13) of the murdered female has been directed to the Peradeniya children’s home until September 23.

The body of an 81-year-old woman named Walliamma Ragei, who was allegedly brutally assaulted by her son, daughter-in-law and eldest grandson, has been found dumped inside a well behind the house where she had been living.

Her remains were exhumed on September 13 in the presence of Hatton Acting Magistrate Sanjeewa Fonseka.

On the 9th of September, the daughter-in-law had told the Watawala Police that her husband took away the body of his mother to be dumped in the woods as they were financially struggling to have a funeral.

The police then launched an investigation into the incident and recorded a statement from the youngest grandson (08) of the victim. According to him, his father, mother along with his elder brother had tied the grandmother to a chair and assaulted her brutally. The father had then put the grandmother, whose face was bleeding from being beaten ruthlessly, into a sack and taken it away, the child’s testimony said.

Acting on the young boy’s statement, Watawala Police officers initially arrested his mother, the deceased woman’s daughter-in-law. Further investigations had led to the arrest of the victim’s son and eldest grandson on September 12.

Interrogations into the arrestees revealed that the body of the old woman was dumped into a well in the backyard of the house.

It is yet to be confirmed whether this 81-year-old woman was in fact murdered or died of natural causes.