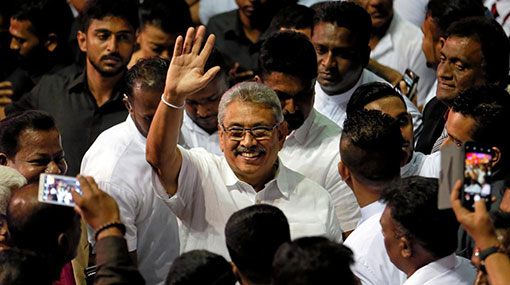 Sri Lankan presidential nominee Gotabaya Rajapaksa would “restore relations” with the country’s top lender China if he wins the Nov. 16 vote and met with a senior Chinese official this week, according to an adviser and his spokesman.

China has repeatedly denied any wrongdoing in its multi-billion dollar infrastructure projects in Sri Lanka.

“Now China is looking at us differently. When Gotabaya Rajapaksa becomes the president... he will set the record right and restore the relationship to where it was,” Rajapaksa’s adviser Palitha Kohona told reporters in Colombo.

“I suppose the thinking was if we upset China, the West would come to us with endless bags of gold... But the bags of gold never materialized,” Kohona said.

Ties between Colombo and Beijing soured when, upon his election in 2015, Sirisena suspended all Chinese investment projects, citing allegations of corruption, overpricing and flouting of government procedures. He allowed projects to resume the following year after demanding changes in some.

Rajapaksa’s spokesman said on Friday that the opposition politician, whose candidature has yet to be confirmed, and his brother, former president Mahinda Rajapaksa, met this week with Chen Min’er, a leader of the Communist Party of China (CPC) and a close ally of President Xi Jinping, to discuss future ties.