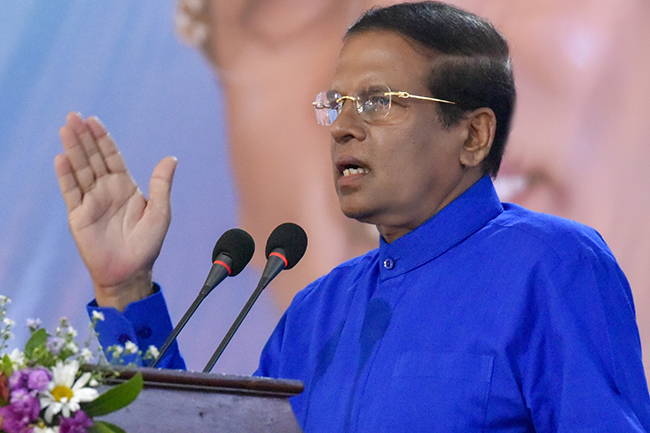 President Maithripala Sirisena said it was his consistent policy that the Executive Presidency should be abolished and attempts to abolish it at a time when an election has been declared is a hoax.

The President made these comments addressing the Matale District Convention of the Sri Lanka Freedom Party (SLFP) today (21), the President’s Media Division (PMD) said in its release.

Speaking on the controversial audio clip that surfaced through social media after it was disclosed by Avant-Garde Chairman Nissanka Yapa Senadhipathi yesterday (20), President Sirisena said former Director General of the Bribery Commission Dilrukshi Dias had vacated her post without his knowledge.

“Former Director General of Bribery Commission should reveal the dishonoured politicians who ordered to file court cases in an unjust manner,” the President emphasized.

The President recalled a request made by the Prime Minister recently to appoint Dilrukshi Dias, who worked at the Bribery Commission during office hours and at the Secretariat of the Bribery and Corruption established at the Temple Trees later, to a post of a Justice at the Supreme Court. He called on Dias to disclose the politicians who instructed her to file cases in an unjust manner.

President, further expressing his views on false claims that the media was excluded from the meeting that was held between him and the members of the Parliamentary Select Committee (PSC) appointed to probe the Easter Sunday carnage, said despite the initial preparation being inviting the media to cover the proceedings, the meeting took place in camera as per a request made the Committee.

“As a leader who respect democratic principles, I agreed to give evidence before the Committee despite instructions by the Attorney General that I can do whatever I choose,” the President said, adding that he has nothing to conceal as he had told the whole truth.

Expressing his views further, the President stressed that the public should be mindful of the policies and principles of newly-formed political parties.

The Matale District Convention of the SLFP was held under the patronage of President Sirisena in Naula with a participation of a large number of Party supporters.

Sri Lanka Freedom Party is a strong political collective and what is more important is the value of the principles of a political party, he continued.

“The Party will embark on a journey to take the country forward and no power will be able to suppress the strength of it. As a political party with a long political history, the image of SLFP has not been tarnished by allegations of corruption, opportunism or nepotism,” the President said further.

The next district convention of SLFP will be held in Matara tomorrow (22) under the patronage of the President.