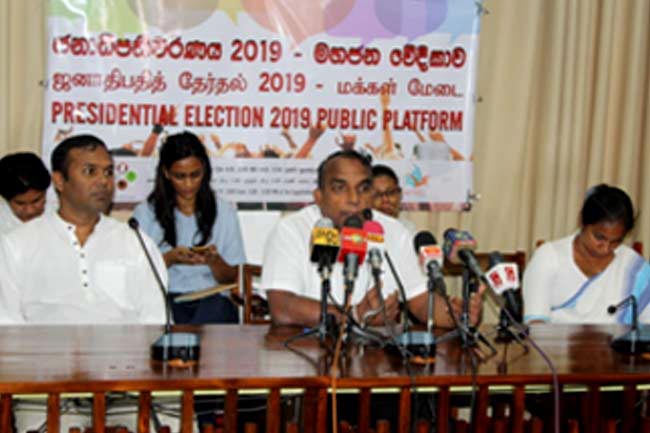 March 12 Movement to bring all presidential candidates to one stage

The AFRIEL Youth Network and the March 12 Movement of the PAFFREL Organization have organized an event to bring all prominent candidates of the upcoming Presidential election onto one stage where they could reveal their strategies in resolving certain issues in the country.

Accordingly, the candidates will be called on to one platform at the Sugathadasa Indoor Stadium on the 5th of October where they will be presenting their solutions for 5 common issues faced by the people.

Various parties and the public have forwarded questions they would like answered during the past few weeks and the questions to be posed will be selected by a special committee.

The same committee will also decide on which political parties will be invited for the program.

In this program, every candidate will be provided with 06 issues and an equal amount of time. Five of these six issues will be informed to the candidate beforehand while the last issue would be chosen randomly.

Further, every candidate will receive three minutes of open time at the end of the program.

The event will be telecast live on TV, according to a release issued by the PAFFREL (People’s Action for Free and Fair Elections) organization.

It is also expected to obtain pledges from the candidates on the manner in which they would carry out their election campaign.

According to the March 12 Movement, the presidential candidates have never been to the same stage ever before in the electoral history of Sri Lanka and this is a turning point in the Sri Lankan culture.