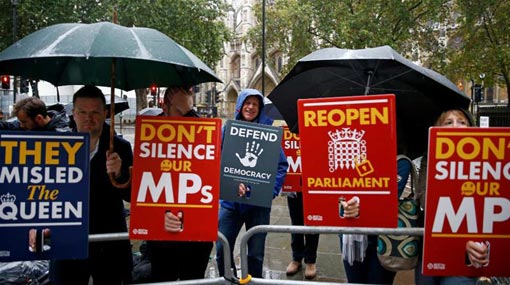 The British Supreme Court has ruled that Boris Johnson’s advice to the Queen that parliament should be prorogued for five weeks at the height of the Brexit crisis was unlawful.

The decision was read out by Lady Hale, the president of the Supreme Court. Unusually, none of the parties were provided with advance copies of the judgment due to its extreme sensitivity. Only seven of the 11 justices who heard the case were present in court.

The first legal question the judges had to resolve was whether the prime minister’s decision – exploiting residual, royal prerogative powers – was “justiciable” and could consequently be subjected to scrutiny by the courts. The English high court declined to intervene; the Scottish appeal court concluded that judges did have legal authority to act.

In a unanimous verdict, the court ruled that Johnson’s decision to prorogue parliament can be examined by judges, overturning the ruling of the high court in London.

Delivering judgment, Lady Hale said: “The question arises in circumstances which have never arisen before and are unlikely to arise again.”

Then, giving the court’s judgment on whether the decision to suspend parliament was legal, Hale said: “This court has … concluded that the prime minister’s advice to Her Majesty [ to suspend parliament] was unlawful, void and of no effect. This means that the Order in Council to which it led was also unlawful, void and of no effect should be quashed.

“This means that when the royal commissioners walked into the House of Lords [to prorogue parliament] it was as if they walked in with a blank sheet of paper. The prorogation was also void and of no effect. Parliament has not been prorogued.”

Hale continued: “It is for parliament, and in particular the Speaker and the Lord Speaker to decide what to do next. Unless there is some parliamentary rule of which we are unaware, they can take immediate steps to enable each house to meet as soon as possible. It is not clear to us that any step is needed from the prime minister, but if it is, the court is pleased that his counsel have told the court that he will take all necessary steps to comply with the terms of any declaration made by this court.”

She added: “The court is bound to conclude, therefore, that the decision to advise Her Majesty to prorogue parliament was unlawful because it had the effect of frustrating or preventing the ability of parliament to carry out its constitutional functions without reasonable justification.”

The court stopped short of declaring that the advice given by Johnson to the Queen was improper. It was a question they did not need to address since they had already found that the effect of the prorogation was itself unlawful.

While speculation ahead of the ruling was that the court would find against the prime minister, the fact that the decision is unanimous came as a surprise. Most commentators had anticipated a split decision, as there was in the article 50 judgment in 2017.

Responding to the judgment, the Commons Speaker, John Bercow, said the house must “convene without delay” and that he would be consulting party leaders “as a matter of urgency”.

Lawyers for the Scottish claimants and for the businesswoman and campaigner Gina Miller argued that, in suspending parliament, Johnson was motivated by an “improper purpose” – namely avoiding parliamentary control over his policies. MPs and peers, they urged, should be recalled this week.

James Lisbon, the solicitor at the law firm Mishcon de Reya, who represented Miller in this case, said: “We are glad that the court recognised the threat to the rule of law caused by a prorogation based on misleading advice given to the Queen.

“This second success for our client Gina Miller in the supreme court is a testament to her resolve to take whatever steps are required to ensure executive overreach does not become a feature of our democracy. This case shows that our courts can be relied on to hold the executive to account when necessary and is evidence of the robustness of our system of separations of powers.”

Labour’s Ian Murray, one of the MPs who brought the case in Scotland, described the result as “historic” and an “astonishing rebuke to Boris Johnson for his disgraceful behaviour”. He called on the prime minister to resign.

Government lawyers had told the court, which sits in Westminster directly opposite parliament, that the justices should not enter into such a politically sensitive area, which was legally “forbidden territory” and constitutionally “an ill-defined minefield that the courts are not properly equipped to deal with”.

Despite torrential rain, the first members of the public began queueing outside for seats in the supreme court at 5.20am on Tuesday eager to be present for the historic decision.