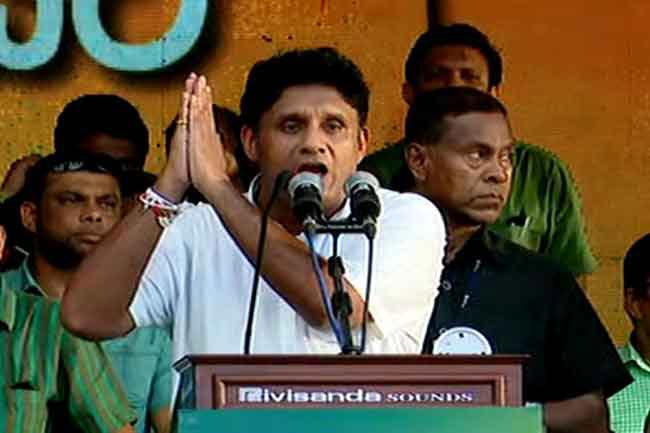 New Democratic Front (NDF) Presidential Candidate Sajith Premadasa says he will not hesitate to give the ‘maximum punishment’ to drug dealers who carry out their rackets while in prison.

He said that, while he does not condone the killing of human beings, he will not hesitate to give the ‘maximum punishment’ to convicted drug dealers who continue their drug racket while being imprisoned.

Sajith Premadasa says that parliamentarian Field Marshall Sarath Fonseka will be appointed to the highest position that will overlook national security in his future government.

He says that Fonseka is not a ‘cardboard hero’ and has proven to all of his capacities by ending the 30-year civil war.

Fonseka will have a huge responsibility to plan and overlook all aspects of eradicating modern terrorism, said Premadasa.

“A future government will not care for personal disagreements or disputes, likes and dislikes. I will gather all those who can work to build the government”, he added.

Further speaking, UNP Deputy Leader says that the government that he will be formed after he is elected will not touch public property and will be the cleanest government in history.

During his speech, Sajith Premadasa apologized to people and Maha Sangha for using the term ‘Sri Mukaya’ at a public meeting recently.