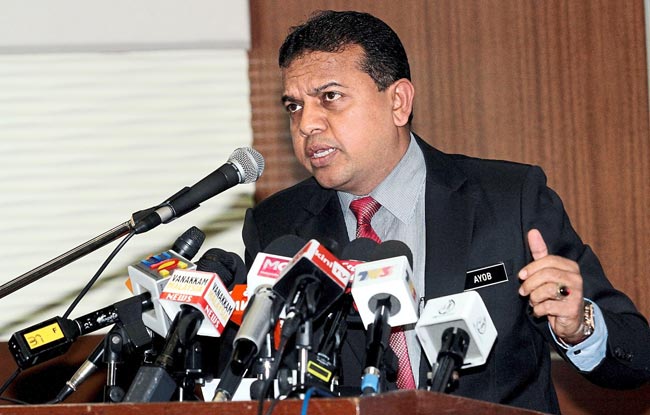 Bukit Aman, the Headquarters of the Royal Malaysia Police, advises all parties not to confuse sympathy for the plight of the Tamil people in Sri Lanka with supporting the Liberation Tigers of Tamil Eelam (LTTE) terror group.

Bukit Aman Counter Terrorism Division head Deputy Comm Datuk Ayob Khan (pic) said there is nothing wrong in sympathising with the Tamils in Sri Lanka but it is an offence to support LTTE as they are a terror group.

“I sympathised with the Tamils too but I don’t support LTTE.

“Don’t confuse the plight of the Tamils (in Sri Lanka) with the terrorist acts of LTTE,” he told a special press conference in Bukit Aman on Sunday (Oct 13).

He was commenting on certain quarters who questioned the arrests of those allegedly linked to LTTE.

On the latest string of arrests, DCP Ayob said five men were detained by E8 officers between 10am and 5pm on Saturday (Oct 12).

The five were a 52-year-old teacher who was picked up in Telok Panglima Garang, an executive officer with Melaka’s Perbadanan Bumi Hijau and a Melaka city councillor who were detained in Durian Tunggal as well as a factory worker and security supervisor in Bukit Mertajam, Penang.

“Those detained were suspected of promoting and supporting LTTE while securing funds for the terror group.

“The ones detained in Melaka were suspected of organising an LTTE Warriors’ Day celebration last year,” he said.

The latest arrests bring the total of those arrested in connection with LTTE to 12.

“We are going to follow the money trail and see where funds were transferred to and from.

“We believe large sums were transferred among those detained but we are not ruling out the involvement of others,” DCP Ayob said.

Asked on certain quarters urging police to charge the suspects in court instead of detaining them under the Security Offences Special Measures (Sosma) 2012, DCP Ayob said the suspects were detained for security offences and not a normal criminal investigation.

“If we merely recorded their statements, I believe they will give ‘superficial’ statements or the bare minimum.

“They were detained under Sosma to enable us to investigate further and seize crucial items pertaining to the investigation,” he said

As per standard operating procedures, family members were informed of the arrests once the suspects were detained under Sosma.

“They will then be given access to lawyers after 48 hours.

“In fact, the two assemblymen detained on Thursday (Oct 10) will be able to meet with their lawyers and family members on Monday (Oct 14),” he said.

On DAP secretary-general Lim Guan Eng saying that police assured him of no more arrests pertaining to LTTE, DCP Ayob said he was not sure where the minister got his information.

“He did not get it from me. I have never issued any statement that we will stop this investigation. If we have enough evidence, we will investigate and make more arrests,” he said.

He also stressed that there was no bias in regards to arrests made by E8 officers.

“Those involved in supporting, promoting or securing funds for terror groups will be arrested regardless of their political affiliation or race,” DCP Ayob said.