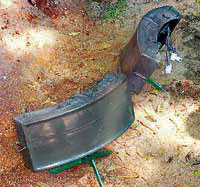 Police have recovered two Claymore mines at Kondavil in Jaffna based on information provided by the former LTTE cadre who was recently arrested in Serunuwara.

The Police Spokesman said that that the Claymore mines, also known as side charges, weighing 15kg each, were found buried in a land in the Warani area in Kondavil.

The discovery was made based on the information uncovered through the interrogation of Joseph Peter Robinson (36), a former LTTE cadre arrested by security forces and handed over to Serunuwara Police on Friday (11).

Following the search of the suspect’s house in Kilinochchi, police discovered a stock of weapons, ammunition and explosives while the suspect’s wife (23) and sister (28) were also taken into custody.

The suspects have been handed over to the Terrorism Investigation Division (TID) for further investigations.