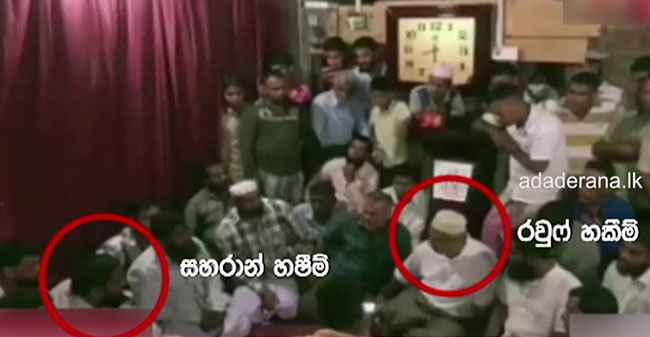 Controversial video released of alleged meeting between Hakeem and Zahran

The ‘Organisation for the Protection of Muslim Rights’ today lodged a complaint with the Police Headquarters calling for the arrest Sri Lanka Muslim Congress (SLMC) leader and Minister Rauff Hakeem, over his alleged ties to the ringleader of Easter Sunday terror attacks Zahran Hashim.

Members of the ‘Organisation for the Protection of Muslim Rights’ had also staged a silent protest in front of the Police Headquarters this morning, demanding the arrest of Minister Rauff Hakeem.

The group claims that Hakeem had met with the leader of the now-banned National Thowheed Jamaath (NTJ) organization, Zahran Hashim, who has been identified as the alleged ringleader behind the Easter Sunday bomb attacks, at the NTJ’s office in Kattankudy during the 2015 general election period.