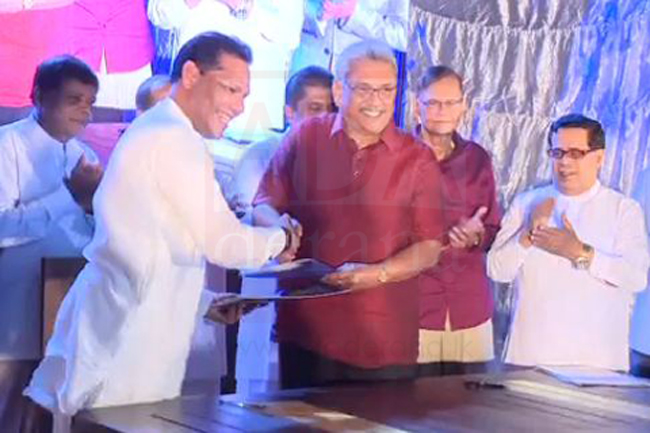 Sri Lanka Freedom Party (SLFP) and the presidential candidate of Sri Lanka Podujana Peramuna (SLPP) Gotabaya Rajapaksa have signed a Memorandum of Understanding (MoU) a short while ago.

The agreement regarding the upcoming Presidential Election was inked by Gotabaya Rajapaksa and SFLP General Secretary Dayasiri Jayasekara during a ceremony held at the Western Province Aesthetic Resort.

UPFA Parliamentarians Mahinda Amaraweera, Nimal Siripala de Silva and several other SLFP members along with the chairman of Sri Lanka Podujana Peramuna Prof. G.L. Peiris were present at the ceremony.

Addressing the event, MP Jayasekara said for the first time in Sri Lanka, a professional is running for president upon the request of the national forces of the country.

The people have a feeling of revulsion toward the politicians, Jayasekara said, adding that they are also looking for a new leader who can pave a new future for the country.

SLFP’s General Secretary pointed out that this MoU signed with Gotabaya Rajapaksa also includes all virtues of the lone battle carried out by President Maithripala Sirisena to establish democracy, to wipe out corruption & fraud, to crack down on drug menace and to protect the nature.

Addressing the gathering, presidential hopeful Gotabaya Rajapaksa said he would not undermine the trust that the SLFP has on him even after they form a new administration in the future.

Rajapaksa said there is no need for baseless fear that the agreement between him and the SLFP would affect the party’s policies and the identity.

On October 9th, the SLFP confirmed that it will support Gotabaya Rajapaksa at the Presidential Election. The following day, the SLFP and SLPP signed an MoU.