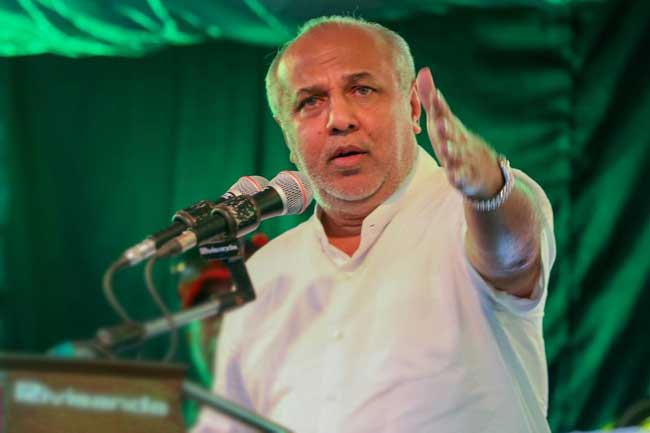 Minister Rauff Hakeem stated that he was checking on his supporters over harassment by M.L.A.M. Hizbullah, back in 2015, when the ringleader behind the Easter Sunday terror attack, Zahran Hashim, attended the meeting.

Sri Lanka Muslim Congress (SLMC) leader stated this commenting on a video clip released on a discussion from a discussion allegedly attended by both Hakeem and Zahran.

The ‘Organization for the Protection of Muslim Rights’ handed over to the police a CD containing footage and images from a discussion and demanded the arrest of SLMC Leader over his alleged ties to leader of the now-banned National Thowheed Jamaath (NTJ) organization, Zahran Hashim.

Addressing a public rally held in Akurana yesterday (19), Hakeem said that following the April 21 Easter attacks, not only the intelligence units, the whole Muslim community is also on alert to destroy anyone among them who has extremist ideas and makes extremist statements.

Speaking on the video, the Minister said that he should clear up the background of this meeting.

“Our party was able to win a seat in the Northern Province at the last General election. United National Party (UNP) won one seat and the Tamil National Alliance (TNA) won three.

There were five seats for the Batticaloa district. Hizbullah supported Mahinda Rajapaksa at the last Presidential election.

When Rajapaksa lost the presidential election, Hizbullah lost the General Election. He then came in through the backdoor and begged our current President and received a parliamentary seat through the National List.

With the pride in receiving a National List MP seat, he then harassed our supporters and set fire to their shops and houses.

Then I went to Kattankudy to console our supporters. Zahran had also crawled into this. What am I to do about that?

When a politician goes to a place with an issue like that, who knows who comes there? Would we know that he would become a terrorist later?”